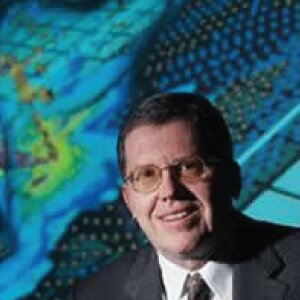 Robert Wilhelmson, Professor of Atmospheric Sciences at the University of Illinois and Senior Research Scientist at the National Center for Supercomputing Applications (NCSA), received his B.S. degree in mathematics from Wheaton College, Wheaton, Illinois. He then completed his M.S. (1969) and Ph.D. (1972) in computer science from UIUC in the areas of computer software and numerical analysis, respectively. In 1979 he received with Dr. Klemp the Outstanding Publication Award from the National Center for Atmospheric Research for research carried out with the newly developed Klemp-Wilhelmson storm model. Versions of this first time-split storm model are still in use today. In 1983 both were presented with the Meisinger Award from the American Meteorological Society. In 1996 Dr. Wilhelmson received (with former student Harold Brooks) the Outstanding Scientific Paper Award from NOAA’s Environmental Research Laboratories. He is currently a Fellow of the American Meteorological Society. He has also served as Head of the Atmospheric Science Department for four years during the 90's.

In the mid-80's, Wilhelmson was a co-PI on the proposal that funded NCSA. This ground-breaking proposal was funded by NSF in 1985 and several years later he became an Associate Director. Since then he has returned to research and teaching and continues his active participation in NCSA and the Alliance as a Senior Scientist and co-leader of the Environmental Hydrology Team. He also heads the Convective Modeling Group which spans the department and NCSA.

Dr. Wilhelmson has a keen interest in computational science as a whole. At NCSA Dr. Wilhelmson participates in activities that make use of new high performance technologies for solving models and for visualizing the billions of numbers that such models produce. Areas of specific interest include (1) the effective use of highly parallel computers, (2) the distribution of numerical computations/analysis/visualization across heterogeneous computers on the national computational grid, (3) the development of scientific portals for collaborative use of these resources, (4) the use of virtual reality in scientific analysis of model data, and (5) the teaching of numerical methods. He is also involved in digital library and collaborative scientific/education tool development where effective use of the Internet is made. Past efforts include the HORIZON Project that developed and utilized digital library technology, specifically World Wide Web (WWW) client and server technology, in support of scalable public access for locating, moving, and analyzing earth and space science data.

Educational efforts have included CoVis (Collaborative Visualization Project) in collaboration with the Northwestern University. WWW resources and software technology were developed for use in teaching atmospheric sciences in the K-12 educational community. This led to the development of Weather World 2010 which contains both atmospheric learning modules as well as current weather data (ww2010.atmos.uiuc.edu). Currently educational research is geared toward improvement of conceptual understanding of introductory materials in non-major geoscience courses through collaboration with the Program for the Advancement of Geoscience Education at UCAR, the visualization group at NCAR, and several other researchers. The development of a Virtual Exploratorium is the emphasis of this effort that involves active student inquiry of models and data sets.