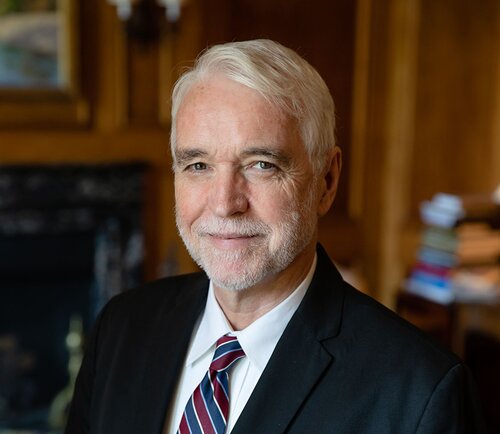 Timothy L. Killeen took office as the 20th president of the University of Illinois on May 18, 2015, bringing more than three decades of experience as an educator, researcher, and administrator in public higher education and in leadership positions with national scientific research agencies.

In the first months of his presidency, Killeen led the development of an ambitious new Strategic Framework to guide the U of I System and its universities in Chicago, Springfield, and Urbana-Champaign. The roadmap sets high-aspiration goals to make the U of I a model for higher education in the 21st century, and build on its rich legacy of service to students, innovation, and economic growth.

Enrollment has since grown to a record 83,000-plus students across the System and its faculty have been chosen to lead important research projects from healthcare to cybersecurity, adding to nearly $1 billion in annual research funding. Killeen also has launched new innovation initiatives to promote economic prosperity in Illinois and beyond, including a council that brings together CEOs of top companies in the state to explore new partnerships.

Under his leadership, the U of I System also has proposed a groundbreaking new partnership with the state of Illinois to support its efforts to transform the lives of students and drive economic growth. The proposal would restore predictable funding in exchange for tangible contributions that serve students and the state, such as holding down tuition and maintaining high student retention and graduation rates.

Before joining the U of I System, Killeen served as vice chancellor for research and president of the Research Foundation at the State University of New York (SUNY), one of the nation’s largest higher education systems. In his dual role, he was at the center of SUNY’s strategy for research growth.

Earlier, he served as assistant director for the geosciences at the National Science Foundation, as the Lyall Research Professor at the University of Colorado, as director and senior scientist for the National Center for Atmospheric Research, and spent more than 20 years as a faculty member and researcher at the University of Michigan, where he also served as associate vice president for research.

A leading researcher in geophysics and space sciences, Killeen received his bachelor’s degree and Ph.D. at University College London, where he earned his doctoral degree in atomic and molecular physics at the age of 23.

Killeen's wife, Roberta M. Johnson, holds B.S., M.S., and Ph.D. degrees in geophysics and space physics from the University of California, Los Angeles. She has published more than 60 peer-reviewed papers and other publications in the areas of isotope geochemistry and upper atmospheric research, as well as on educational programs.

She began her career as a research physicist at SRI International in Menlo Park, Calif., before moving on to continue her research at the University of Michigan Space Physics Research Laboratory.  While there, she initiated the Windows to the Universe project, which she continued to direct until 2016. She also served as director of education and outreach at the University Corporation for Atmospheric Research, as a scientist at the High Altitude Observatory, and as executive director of the National Earth Science Teachers Association.  Most recently, she served for three years as a clinical professor at the State University of New York at Albany in the Department of Atmospheric and Environmental Sciences. She is a fellow of the National Earth Science Teachers Association, and received the American Geophysical Union’s Athelstan Spilhaus Award in 2016 for her work to bring the excitement and beauty of the geosciences to the public.

The Killeens have three children.