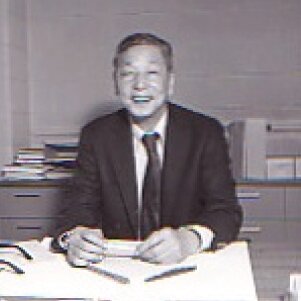 The contribution of Professor Yoshimitsu Ogura to the creation of the Department of Atmospheric Sciences (DAS) at U of I was unique. He was the founder of DAS and its first Department Head from 1982 to 1986. Yoshi Ogura was recruited from Japan by U of I back in 1969 to establish a Laboratory for Atmospheric Research (LAR) within the Graduate College. The goal was to create a graduate program on campus that would specialize in atmospheric research. At that time, he was a professor of marine meteorology at U. of Tokyo and the director of Japan’s Ocean Research Institute. Even then, Yoshi was no stranger to the U.S. system of academic institutions. Upon getting his doctoral degree in Meteorology in 1954 from U. of Tokyo, he had spent two years at Johns Hopkins University and six years at MIT as a visiting research scientist. He went back to University of Tokyo as a faculty member afterward, only to return again to the U.S. in 1969 for 19 more years. After having accomplished his goal of establishing DAS at U. of I, Yoshi finally retired in 1988. He has been spending his retirement with Masako in Tokyo ever since.

Yoshi Ogura laid the foundation for DAS by recruiting a handful of newly graduated Ph. D’s as faculty members in the first few years of his tenure at U of I This small team immediately initiated a multi-facet research program and designed a suite of graduate courses of atmospheric sciences. They also began supervising the thesis research of a number of physics graduate students at U of I who wished to become atmospheric scientists. The first U of I student specializing in atmospheric sciences graduated with a Ph. D. in 1973 under the auspice of LAR. As an outgrowth of LAR, the Department of Atmospheric Sciences was officially established in December 1981 in the Graduate College. DAS was eventually transferred to the College of Liberal Arts and Sciences in 1993.

Professor Yoshi Ogura is an outstanding atmospheric scientist of many talents. He did extensive fundamental research in turbulence and the nonlinear dynamics of thermal convection, including the formulation of the anelastic equations with Norman Phillips, in his early professional years. For that, he was recognized with the distinguished Fujiwara Award from the Japan Meteorology Society in 1980. His research during the tenure at U of I included in-depth diagnoses of the nature of scale interaction between an ensemble of clouds and its environment in the tropical atmosphere, boundary layer dynamics, numerical studies of the dynamics of hurricanes as well as squall lines and severe storms in the extratropics. In addition, he authored several books including a number of best-seller general atmospheric science books in Japanese.

In honor of the unique contributions that Professor Yoshi Ogura had made to U of I, the Department initiated an annual lecture series in 1988, the Ogura Lecture. In the past 18 years, many distinguished scientists have been invited to speak on topics attractive not only to the atmospheric science students but also to the general student body and faculty on campus. The Ogura Lectures have covered wide ranging topics from the science of numerical weather prediction, observational and numerical studies of severe storms, atmospheric chemistry, global environmental issues, climate changes, large-scale atmospheric dynamics, to the theory of chaos. In 2005 and 2007, Yoshi sent very generous gifts to DAS to support the Distinguished Ogura Lecture Series and Ogura Awards for outstanding graduate and undergraduate students. With these gifts, the Department will be able to bring outstanding scientists as Ogura Lecturers to introduce campus to the exciting frontiers of atmospheric sciences.

Those who have worked with Yoshi Ogura fondly recall what a generous and wonderful colleague he was. What it was like working in the early nascent years of the Department is perhaps best expressed by Yoshi’s own words last year, “… your card and photo remind me of the time when all of us were young, full of energy and working, talking, drinking, laughing together all the time.”